The cultural density of the region, which has has its origins particularly in the Ottonian period , is reflected in the large number of monasteries and churches.

Along the "Romanesque Road" you will find in Quedling  three facinbating buildings: the abbychurch St. Servatius with the treasure, the Wipteriichappel

Back to life is also on the Münzenberg former Marie monastery, the Romanesque abbey church was exposed too.

Near Halberstadt  lies the Huysburg, which is filled with life today by monks. The double monastery of 1080 was later extended by the Diocese of Magdeburg to a religious and a family education center. Since 1972 the resulting abbey around the Roman church was the only Benedictine monastery in the GDR.

In the complex of the monastery of Michaelstein, near Blankenburg, is the Saxony-Anhalt State Music Academy, which invites you again to outstanding concerts. Also, the Convent gardens can be visited.

The Harz Watersystem of a system of ponds and canals, declared 2010 as the UNESO World Heritage Site, has its origin in the fish ponds of the former Cistercian monastery Walkenried. From the great monastic church are only the fundamental walls are preserved. The tour of the monastery building leads into a multi-faceted exhibition of monasteries.

During the Ottonian period was also built the Benedictine monastery Drübeck, which is now a conference center of the evangelical church. The monastery with the basilica church is surrounded by extensive gardens, in which takes place the well-known event "Romantic Night" in  in the late summer.

The Luther Memorials Places in Eisleben, the birthplace and last residence, his workplace, today's Luther's House and parish church in Wittenberg and the nearby Cranach courtyards and the Melanchthon House give a striking impression of the heartland of the Reformation. 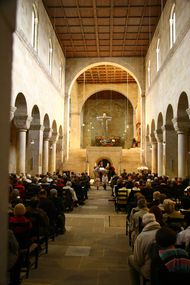